“Dearly beloved, we are gathered here today to get through this thing called life.” This post isn’t a tribute to Prince, but a tribute to the final step in the most challenging year of my existence, so far. Prince is also dancing around in my brain almost constantly after news of his death last week, therefore it would be impossible not to bring a little of him into this.

One last ridiculous meal. Restaurant Helen in Houston. I can’t praise the food and entirely Greek wine list highly enough! See how happy Monica is when we’re going crazy with food and wine? My parents look similarly pleased on the opposite side of the table. Except my dad, it’s approaching 7pm and he wants to go to bed. (helengreekfoodandwine.com)

On April 14th I arrived at the hospital with my parents and sister in tow for my final operation. Having the ileostomy reversed is much less harrowing than the first surgery, and I’ve been poked and prodded so often this year that an IV or two and a few extra shots don’t actually stress me out anymore. This time they gave me the option of an epidural or an Exparel shot for the post-op pain, and because I think it’s always better not to have something injected into my spinal cord, I chose the Exparel. What’s Exparel? It’s a nerve block that they inject directly into the surgical site to numb the area for about 4 days. How do I remember the name so well? It was on a wrist band I wore in the hospital. Very rock ‘n roll. In theory this is an easy surgery, cut out the part of my small intestine that was my darling stoma, sew the two ends back together, and drop it back down through the astoundingly taut and toned layers of my abdominal musculature. My words, obviously. And it was easy. Everything went beautifully. Except the fact that for some reason the Exparel didn’t kick in until about 4 hours after I woke-up. 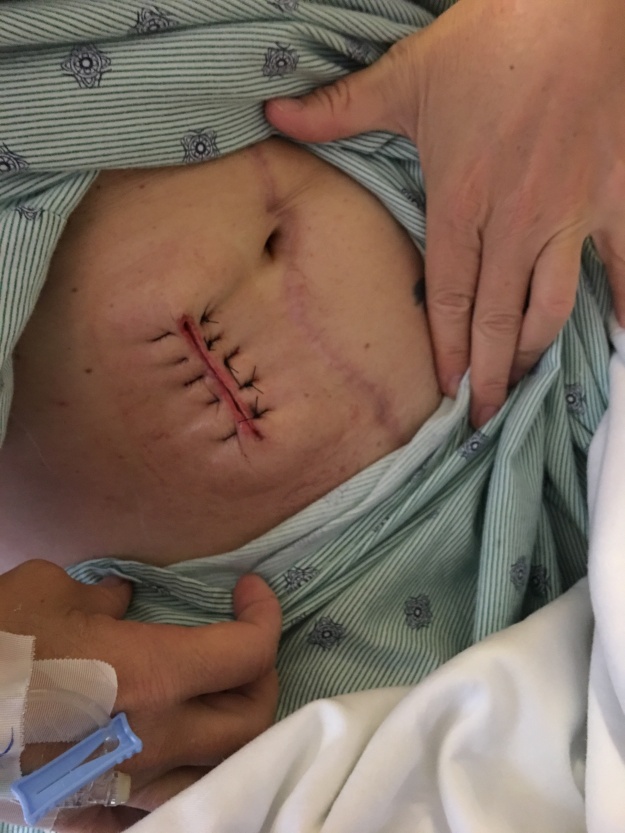 Looks like Dr. Frankenstein took a hatchet to my stomach, however, I’m saying it was a Brazilian knife fight. That’s my story and I’m sticking to it. #knifefightinRio

I now know what it feels like to be in so much pain that it makes you want to vomit. Yay, more lessons from that barbarous teacher named cancer. The last thing they want you to do after abdominal surgery is puke, and I was nauseous and in pain, but when they would ask about my pain levels all I could say was “maybe a 6 or 7? “Why in the world am I such an idiot? I have no clue. All I can think is that in my incapacitated state I thought that if I didn’t say it, it wasn’t so. I do love some good delusion, but thankfully my sister, who knows me pretty well, pulled the recovery nurse out into the hall and told her that if I was saying 6 or 7, it was probably a proper 10. She also said I looked like I might die. I love her so much. From there they kicked into action. In under 1 hour I got 2 IV doses of phenergan, a dose of emend (both strong anti-nausea meds), 2 IV doses of dilaudid and a bump of morphine. I was flying for the next 24 hours, AND, because MD Anderson is the best place ever in the history of everdom, they continued to give me IV Dilaudid every 6 hours with hydrocodone and tramadol thrown into the mix in-between to keep me comfortable. Oh la la, I was very, very, very comfortable. I didn’t know my name, actually didn’t care, but I was very comfortable.

Sweet Graham came to visit, and honestly, I know we had fun, but I only remember it because of this photo. Truth train. (And I don’t know how to scale photos on my blog, so our faces are HUGE!)

The goal following an ileostomy reversal is getting your bowels to move, or to pass gas, and they won’t discharge you until one or the other happens. I don’t think I was asked any less than 60 times in those first two days if I had experienced any activity. Everyone is super interested. Even my friends. They asked A LOT. So we walked and walked and walked. My mom and I actually got our 10,000 steps that second day! Which is amazing because I wasn’t moving quickly. Too loopy. I quickly went from a liquid diet (who knew that an Ensure slushy can be delicious) to soft solids, and the astounding feeling of absorbing nutrition after 8 months of absorbing almost none was beyond inspiring. The end result is that I felt much better than I ever anticipated. About a month after finishing chemo, I found myself incredibly perturbed that I still fatigued quickly or couldn’t keep a train of thought. I understand that chemo brain is real because I still have some memory loss, but I didn’t realize how much malnutrition was affecting my ability to think or concentrate. After two Ensure’s (which are gross and chemically…don’t drink them unless you must) that first day in the hospital, I started to perk up immediately. When I began to add other foods I thought I might dance out the front door. The end of the story is that on night two my bowels began to work and they discharged me the next morning. According to everyone, I’m really good at recovering from surgery. It’s a skill.

Having friends send gorgeous orchids always helps with a speedy recovery. Thank you guys so, so, so much!

My mom and I drove home with floods bearing down on Houston, and started trying to figure out what I could eat. The first 5 days were lots and lots of white foods. They call this the low-residue diet and I stuck to it. White bread, eggs, bananas, rice, mashed potatoes, sweet potatoes, blah blah bland bland, but it works. Most people post-ileostomy have uncontrollable diarrhea and can’t be away from a bathroom. Their anal sphincter is unconditioned and weak. Not to toot my own horn or anything, but not me. Toot toot. My stools were firmed up the day after discharge, my bowels tended more toward constipation so I actually needed to add some foods with higher fiber to my diet instead of eliminate them, and because I have diligently been doing my anal kegels since last October, I can actually hold my bowels. Side note: this newfound ability to talk to openly about the state of my bowels is astounding, which is a good thing, because it comes up often. Anyhow, I’m able to drink coffee without upset, thank god, and I am now, 2 weeks post-op, walking for about an hour most days…away from the house! Ta. Dah. The goal is to slowly add foods to my diet, only one new, higher fiber food every couple of days, and find out what affects my stomach and what doesn’t. They say that your sensitivities  will be similar to the ones you had before. Luckily for me, I’ve never had a super sensitive stomach. Except for that time my sister drove me to madness in Barcelona and I bought coffee from a questionable vendor. Who deprives someone of coffee for the first 3 hours of their day? Is the Sagrada Familia really that great? Yes it is, but I still needed my coffee. 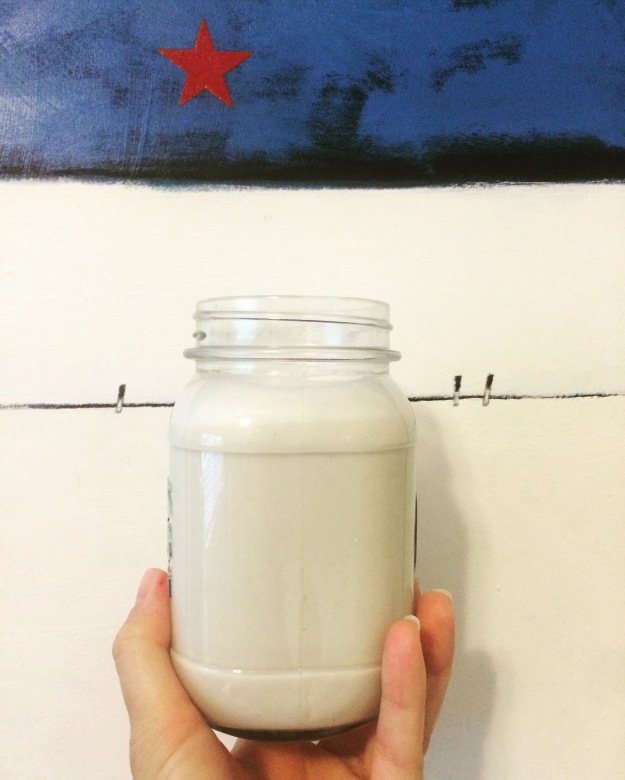 Starting here. Cashew citrus milk. Sprouted nuts, good for the guts, and it’s got me back in the kitchen. Miracles do happen! Recipe by Sweet Laurel Bakery (sweetlaurel.com). She has multiple recipes for delicious nut milks on her blog.

The lesson this taught me that I knew before but had forgotten because bbq, tacos, sweetbreads, fried chicken, and old fashioned’s ARE a way of life, is how completely nutrition affects our physical well-being. The way the human brain and body respond to even the most minimal amount of nourishment is awe inspiring, and I am super curious to see what happens if I focus on super nutrition. To that effect, you will see me cooking more, hitting the farmers markets more, and repopulating my gut microbiome with healthy, happy, helpful bacteria. How many people actually have the opportunity to repopulate their gut microbiome? It’s a rare opportunity and I intend to take advantage. By the way, if you haven’t been turned on to the gut microbiome, yet, I suggest you do some research, or read my next post, because all I can think about these days is my gut! So far I find that with a little more fiber in my diet (important for the gut microbiome) I void more at once, which is important because I don’t have much of a rectum left. It’s all about getting my colon back into tip top shape and teaching it to act as a rectum, and I’m well on my way to doing it. I also have to believe that my Pilates practice has had something to do with my success. Maybe it’s the internal massaging the happens during many of the exercises, or keeping the abdomen toned. I don’t know, but according to my doctor I’m experiencing the best possible outcome we could have hoped for, and we’re both thrilled.

Now its time to move on and focus on beginning a new work life, moving forward, taking care of what I now know is an extraordinary machine (seriously, I should have bred when I had the chance because, in general, my genes are super stars), and keeping these lessons with me. What I’ve learned in the last year is that I have an extensive and dedicated support network, how to ask for help, and how to, at times, be weak in front of others. I have learned that even during crisis, I am really good at getting “through this thing called life.”