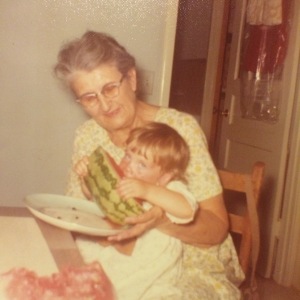 Helen Mexico Bowers and I, circa 1973. Watermelon is everything

This is a story about rectal cancer. My rectal cancer, and how I got comfortable talking about my rectum. A lot. To be clear I am not dying. The prognosis for rectal cancer is excellent, and all around me people are relieved to hear that this will not be the thing that kills me. I am, too, but since I’m not worried about death (immediately) the conversation that swirls in my head regards ostomies, bowel function, and a tumor that is “abutting my vagina.” 43 year old women have enough on their plate as hormones levels plummet and crows feet sink in. It seems a little much to top it all off with the possibility of a permanent colostomy bag. But we do what we got to do, and this will follow how I do it.

In July of 2014 I discovered my fruit monger. He was a middle aged Hispanic man who I’d noticed on Riverside Dr. for years. His long trailer with the striped awning was always filled with watermelon, mango, papaya and other good stuff, and finally one day I stopped. In this moment I discovered the perfect seedless watermelon and an addict was born. I was going through 1 medium watermelon every two days: watermelon chunks, watermelon juice, watermelon salad, watermelon gazpacho. I was a watermelon addicted sailor. Around this same time I started to notice some bloody streaks in my stool. Of course, with the amount of watermelon I was eating it was probably the beet affect. Most probably the massive amounts of fiber had inflamed the lining of my stomach and it was irritated. Along with the bloody streaks I had also noticed I was going to the bathroom multiple times a day, with a little looser stool that, in retrospect, was narrowed. I googled watermelon. Watermelon is almost 100% water and fiber. So, of course, once again, it made perfect sense that my symptoms were a result of heavy watermelon consumption. As a Physical Therapist who had dealt with many diagnosis this made the most sense to me. 6 weeks in I cut back on my watermelon consumption and decided to give my stomach a break.

Nothing changed. Except for my stool was firmer from having less fiber (for some this might seem an unnecessary detail, but if you’re reading for information it matters). The blood was bright red and seemed fresh when I saw it on toilet paper. And this brings us to what I thought I knew about cancers of the stomach or colon. Symptoms include:

None of these things pertained to me really, as I saw it. In July I also decided to take a month to really clean up my diet and lifestyle; at 42 it seemed time to reign it in. I had split with my husband in 2010 and spent the next few years thoroughly enjoying life. July 2014 was a season of change. Pilates twice a week, daily cardio, smoothies, macrobiotic meals, organic foods, and plenty of rest was “in” while heavy meals, wine, liquor, sleeping in and dinner at restaurants 7 nights a week was “out”. Although things eventually evened out in August due to being extremely bored with my newer, healthier self, I did maintain more moderate habits. I should have felt like running a marathon, climbing a cliff face or dancing into the wee hours of the morning.

But I was still tired. Not fatigued, not completely lethargic, just generally tired. The bleeding continued, but I had no pain, zero weight loss and no dark tarry blood. In my mind one of the perks of cancer was extreme weight loss. No such luck. My stomach felt gassy and bloated, but everyone knows those are symptoms of too much gluten. I was fine working and exercising, but I stayed home more and stared blankly at the tv more. A quick google search indicated possible internal hemorrhoids, possibly a bleeding ulcer, maybe an anal fissure. My mother and Pilates teacher urged me to see my PCP, but I was busy and kept putting it off.

In October it finally sunk in that the bleeding wasn’t going away, I was a little tired ALL the time and I had been ignoring this about as long as I could without being completely ridiculous. I made an appointment with my parents PCP and decided to get this checked out and go on with my life.